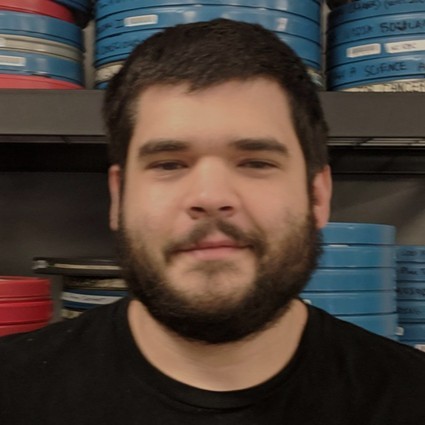 I graduated from Rutgers with a BA in English in Cinema Studies, having taken many wonderful classes with Al Nigrin, John Belton, Richard Koszarski, and others. My time at Rutgers came just before Cinema Studies got its own major and before Mason Gross added its Filmmaking program. As much as the educational options have expanded for students at Rutgers with an academic interest in cinema, I received a wonderful education in Cinema Studies studying within the English and American Studies departments and owe much to my teachers and fellow students who taught and worked with me from 2008-2012. In particular, I appreciate the introduction to Surreal and Dada films I may not have found myself otherwise!

I spent a summer working on various television productions in NJ and NYC, but soon felt the right thing for me was pursue a career in motion picture archiving and preservation. Preservation is an area that was always of paramount interest to me and my (at the time) near-obsessive fascination with the accessibility of older and less-commercial films via home media, but I had not known that there was much of a field of study around it that one could pursue. With the help and guidance of some of my former professors, I discovered the L. Jeffrey Selznick School of Film Preservation at the George Eastman Museum in Rochester, NY. I applied and was accepted into Selznick School for two years of study from 2014-2016, during which time I received a remarkable education and hands-on experience in the archiving, cataloging, curation, conservation, restoration, and preservation of motion pictures. In 2016, I graduated with a Masters degree in English from the University of Rochester and a certificate of study in film preservation from the Selznick School. My particular focus of study was in digital preservation, and my final project for the School was to formalize a process for the production of Digital Cinema Packages from archival films. While working on that project and later as a Fellow, I participated in the remarkable digital preservation projects for some exciting films, such as the early Orson Welles and Joseph Cotten "movie" Too Much Johnson.

My professional career started with a one year stint working at Media Transfer Services, a Rochster business at which I digitized magnetic tape media and film for both large institutional collections and local individuals with small shoebox collections. From there I was hired by Memnon Archiving Services in Bloomington Indiana, where I managed the film inspection and digitization activities of the Memnon film lab, mostly in service of a massive digitization project for the Indiana University Libraries Moving Image Archive that saw us digitize over 23,000 films. After four years in Indiana, I was hired into my current position as a Film Preservation Specialist at the National Archives and Record Administration in Maryland.

Though I'm still new on the job, having only started in October 2021, I'm thrilled to be working at the National Archives. My work sees me handling and inspecting film on a daily basis, fostering access to archival film materials through digitization, and preserving at-risk film materials through both digital and photochemical means. My National Archives colleagues and I fulfill a critical function of preserving and fostering access to vital records that tell the story of U.S. history and can shape the way we approach the future. My job responsibilities are technically involved and very rewarding, and I look forward to serving in this critical role for many years to come.

I hope anybody reading this who has a latent interest in motion picture archiving and preservation and would enjoy studying it might be moved to pursue a career in this stimulating, fascinating, and utterly critical field.