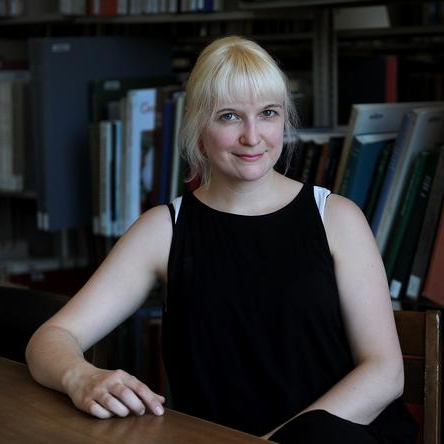 My favorite memory of the Rutgers Film Co-Op was projecting Godfrey Reggio’s Koyaanisqatsi on film and manually switching reels/projectors. Two of us were poised for the cue, the reel ending on a group of Vegas showgirls staring into the camera point blank. Everything about that moment— the meaning & composition in the frame, the Philip Glass score, the synchronizing of the projection booth, the silent, rapt audience — I knew then that I was in the right place and needed to continue to be in this kind of place.

I graduated from Rutgers in 2004 with a degree in English and concentrations in cinema studies, visual art, geography & gender studies. Upon graduation, I drifted over to New York, eventually producing the feature length animated documentary, Gravity Was Everywhere Back Then, which was acquired by MoMA in 2011. While internationally touring the film to fests and museums as an expanded cinema performance, I began a blog to chronicle the experience.

The blog included film reviews, criticism and images of life on the road. This writing led to being published in the online film journal Hammer to Nail and Filmmaker Magazine. From there, I worked as a film screener/script reader (Rooftop Films, Tribeca, the Athena List), film programmer (True/False Film Fest, Oxford Film Festival) and acted as the artistic director of the women’s film festival Citizen Jane.

Currently I screen documentaries for Sundance and POV, review grant applications for a nonprofit film organization, act as a media curator for digital platforms and teach in the University of Missouri’s esteemed journalism department. My nonfiction book on the Cat Power album Moon Pix was recently published as part of Bloomsbury’s 33 ⅓ series.

Apart from the sense of community and the access to incredible films that the Rutgers Cinema Studies department provided, they also laid a strong foundation of critical thinking, writing, and film theory skills that I use in my work across media to this day. But, most importantly, the department helped me find and gain confidence in my own creative voice, something they continue to do for every cinephile student lucky enough to join them.