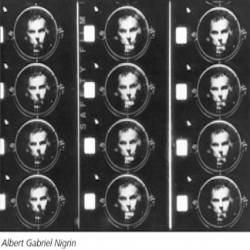 Albert Nigrin is Cinema Studies Lecturer at Rutgers. Courses he teaches for the American Studies and English Departments include: "American Experimental Film," "Documentary Film," "David Lynch and the American Avant-Garde," "Cult Films in American Culture" and "Major Filmmakers." In addition, he is the Executive Director of the Rutgers Film Co-op/New Jersey Media Arts Center, Inc., which presents the New Jersey Film Festival, the New Jersey International Film Festival, and the United States Super 8mm Film + Digital Video Festival. Professor Nigrin has an M.F.A. in Visual Arts/Film and Video from Rutgers University and he is also an award-winning experimental media artist. He was a 2002 New Jersey State Council on the Arts Media Arts Fellowship winner, and he has also received fellowships from the National Endowment for the Arts/ American Film Institute Mid-Atlantic Media Arts Fellowship Program and the Ford Foundation for his film/video work. In addition, his films/videos were screened as part of the 2004 Enter The Screen: Experimental Film program in Changzhou, China, the 2005 Floating Images: Experimental Film program in Shanghai, China, the 2006 Toronto Images Film Festival, the 1998-2001 Big as Life: An American History of 8mm Filmmaking Retro at the Museum of Modern Art in New York, and at many other Festivals, Media Centers and Universites. His films/videos are distributed by Canyon Cinema.