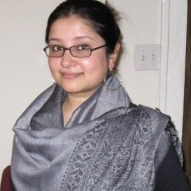 Meheli Sen is Assistant Professor in the Department of African, Middle Eastern, and South Asian Languages and Literatures (AMESALL) and the Cinema Studies program at Rutgers University. Her primary research area is post-independence, popular Hindi cinema, commonly referred to as Bollywood. Sen's work has been published in journals such as Cinema Journal, South Asian Popular Culture, LIT: Literature Interpretation Theory, The Journal of the Moving Image and South Asian Review, as well as in the edited anthologies Bollywood and Globalization: Indian Popular Cinema, Nation, and Diaspora (Anthem, 2010) and Reading the Bromance: Homosocial Relationships in Film and Television (Wayne State University Press, 2014). Sen is co-editor of Figurations in Indian Film, (Palgrave-Macmillan, 2013). She is currently working on a monograph that focuses on 'B' genres, particularly those dealing with horror and the supernatural, within the larger rubric of the Bollywood system.