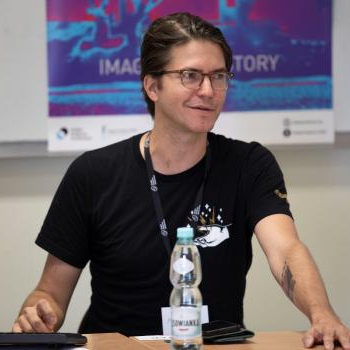 Dominic Leppla is Lecturer in Cinema Studies at Rutgers University. He previously worked at Sarah Lawrence College and Fordham University among other places, where he has taught courses on decolonization and cinema, antifascist aesthetics, media theory and Eastern European state socialist cinema. His PhD was from the Mel Hoppenheim School of Cinema, Concordia University, Montréal, where he also organized as mobilization and communications officer for its graduate student worker union. He has published on the global use of film theory (Frames 2012), censorship in Polish cinema under state socialism (Handbook of COURAGE 2018), the avant-docs of Piotr Szulkin and Grzegorz Królikiewicz (Studies on Eastern European Cinema 2019); his most recent article, for Widok (2021), is entitled: "Film and the Politics of Negative Community. Krzysztof Kieślowski’s Dialectic in the Late 1970s Polish People’s Republic." He lives with his family in New York City.